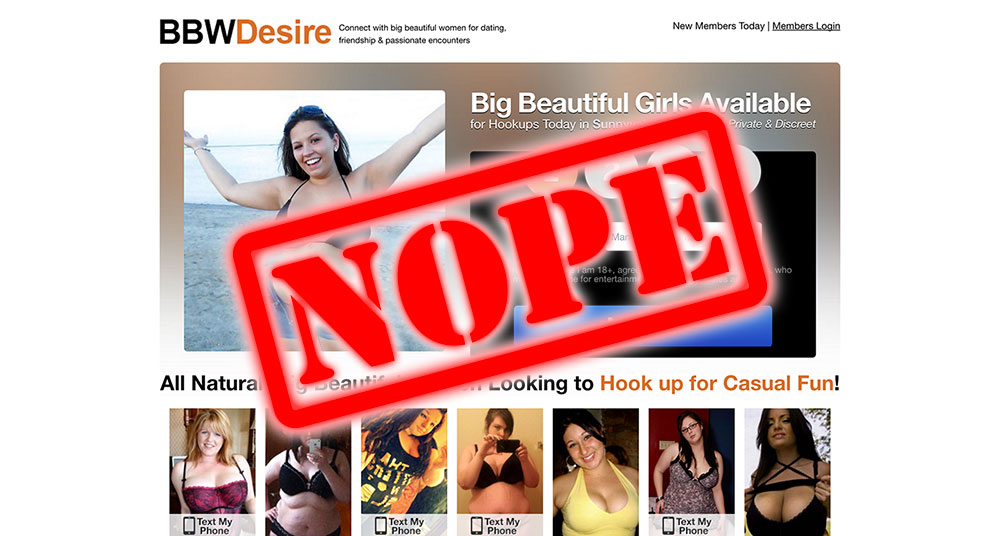 Hankerin’ Hank who’s got a burning yearning for a longing lass: “Hey Frankie. How do I get laid at BBWDesire.com?”

Me: “BBWDesire.com? Mucho simple. In order to make this happen, you actually get to play a little game. I call it Humpy Humpy Rhyme Time. Since this is probably your first time playing, I’ll walk through it with you. It goes kinda rapid-fire. Ready? First you start with the word “desire”. Now rhyme it. Plier? Good good. Again. Quagmire? Nice one. Again. Liar liar pants on fire? Holy shit, you’re good. You sure you haven’t played this before? Alright, now just keep going until you hit ten rhymes. At that point you’re ready to you fucking don’t!”

Here’s the thing, trying to get laid at BBWDesire is even more pointless than playing Humpy Humpy Rhyme Time (clearly a fantastic name for a game, bee tee dubs).

But why, Frankie? What’s wrong with BBWDesire.com?

Quick lesson on things that are fake. Ready?

Knowing what you know now about things that are fake, you can certainly see the following trio of fakeness for the immense pile of steaming turd that it is:

Guess where you find those things?

Apparently, these motherfuckers are all over the damn place.

Details, you say? With pleasure.

First things first, I’m going to give you the best pro tip there is when it comes to dating sites. Here it is:

Whenever you’re thinking of signing up to a dating site, always read the terms and conditions first. Always.

Not, “Lemme just fill out this signup form first.” Not, “I’ll get to it later.” Not, “It’s probably fine.” Because I’ll tell you what, chances are it’s not fine. Sadly, these days it seems like there are an awful lot more deceitful dating sites out there than legit ones.

Luckily, you now have in your brain arsenal the absolute best super-scam-avoidance tool. You’ve been filled in with the best thing you can do for yourself when you’re about to sign up to a dating site. I’ll repeat it: Read the terms and conditions. First.

The terms and conditions is essentially a document that says if you use a site, you agree to all the blah-de-blah the site puts in there. That’s fine for the majority of it, but it sure as shit isn’t fine for the scammy shit that gets buried in there by less-than-reputable dating sites.

And rest assured, they don’t let you know about how they plan on shafting you out of the kindness of their hearts. No, they put that stuff in there in order to cover their own asses. So they can say, “But we told him about all the horseshit that happens on our site.” Then guess who’s screwed? Not them, I’ll tell you that.

See, those motherfuckers count on you to not read the terms. That’s why they don’t worry about disclosing their cons in there. They know full well that most people will just gloss right over that shit without paying the slightest bit of attention.

But we aren’t gonna do that, are we?

In fact, we’re gonna jump on into that motherfucker right now and see exactly what’s up.

The party starts in Section 4:

4.B. You comprehend, acknowledge, and accept that our Service, presented in the style of an online dating service, is an entertainment service. All content is provided for the entertainment and amusement of You.

Just what you’ve always wanted! To be amused!

4.C. THIS SITE UTILIZES FANTASY PROFILES IDENTIFIED AS FANTASY CUTIES. You comprehend, acknowledge, and accept that some of the profiles listed on the Site may be operated by our Site or third party contractors and are fictitious.

There’s them “Cuties”. Fictitious as fuck.

And one more bit for good measure:

4.C.1. Interactions originating from Fantasy Cuties functionality could be computer generated or could be created by the Site or third party contractors hired by the Site.

Hop on over to their terms page if you wanna read the whole thing. There’s more nonsense there (always is), but I think we’re all pretty clear at this point about what exactly is going on.

Fuck that noise in the drive-through, I say.

Look, if you need to go ahead and get bit so you know where not to put your hand next time, go ahead. I’m just here to try and help you avoid that bite to begin with.

With that said, here’s the deal. Do yourself a solid and go have another read through of this review. Really pay attention to the whole bit about fictitious profiles. Let exactly what that means sink in. Then, if you still feel the need to get bit, enjoy the teeth.

Seriously though, you don’t need to get bit.