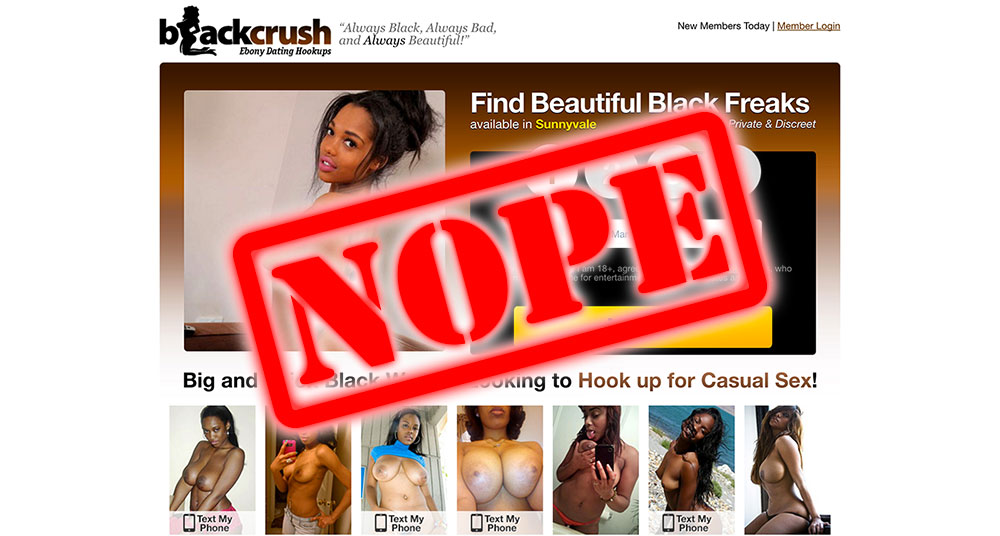 Desirable Dan who can’t wait to crush cans with a sparkly seductress: “Hey Frankie. How do I get laid at BlackCrush.com?”

What I’m saying is, it doesn’t matter how many doors you knock on, nobody’s answering at BlackCrush.

But why, Frankie? What’s wrong with BlackCrush.com?

Man, it’s the same bullshit, just in a different pile.

That’s what you get at BlackCrush.

So, before I get into the specifics, I have to start the ball rolling here by telling you the same thing I’m always telling everybody:

Without fail, before you even think of signing up to a dating site, read their terms and conditions.

Doing that one simple thing can save you so much potential headache, it’s not even funny.

See, if a site is trying to pull a fast one, the terms and conditions are where you’ll find out exactly what kind of deceptive tricks they’re using in order to cheat you out of your precious time and hard-earned cash.

Why would they tell you that, you ask? Why on earth would a site that is actively trying to bilk you out of the aforementioned time and loot that belongs to you ever actually disclose their scams? Good question.

Well, we know they sure as shit don’t do it out of the goodness of their hearts. No, the answer is, because they have to.

In order to cover their asses and keep themselves out of hot water, they bury their bullshit amongst the rest of the legal hibbity-bibbity that you typically find in the terms and conditions. Of course, they know full well that damn near nobody reads the terms (which is why they’re not too busted up about having to disclose their bullshit in there, by the way). Unfortunately for the poor suckers that blast right by the terms and sign up to such shady enterprises anyway, whether they read the terms or not, they’re still bound by them if they use the site. Too bad, so sad.

So, to reiterate, read the motherfucking terms and conditions before you sign up to a site. Mkay?

Let’s have a look-see at some BlackCrush bullshit.

“I mean, we told you we’re just here to entertain you, right? You didn’t think you could actually meet someone at this thing we call a dating site, did you?”

Let’s cleanse our palate with some “Fantasy Cuties”!

Blech! That didn’t work at all. Even worse taste in the mouth now.

And they’re still shovelling it in!

Go have a read through the rest, if you like. There’s always more nonsense. But I think we have a big enough pile of garbage here to understand what we’re dealing with.

Here. We all deserve an actual palate cleanser after that.

So, uh, I don’t wanna assume here, so just to be clear we’re all on the same page…

Everyone understands what the word “fictitious” means, yes?

Everyone good on that?

So, with that said, we can all see how fictitious profiles are a problem, yes?

See, facts is facts. And the fact is, there are fictitious profiles on the site. That’s not something to choose to believe or not. It just is what it is.

Have another read through of the words up the page a bit. Let ‘em sink in. Have a good nod of acknowledgment, and then move on.