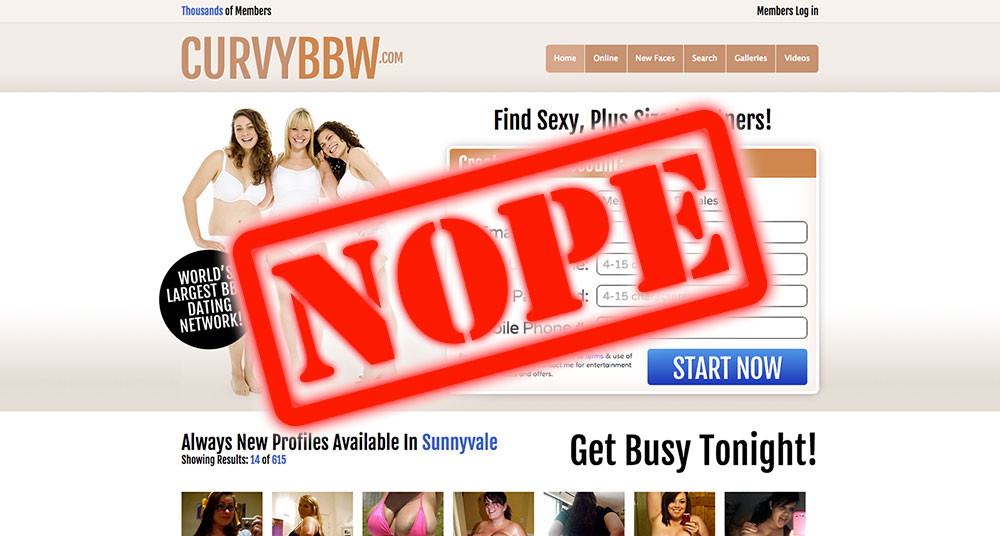 Loopy Larry who wants his knuckleballs caught by a luscious lady: “Hey Frankie. How do I get laid at CurvyBBW.com?”

Me: “CurvyBBW.com? Pretty gosh-darn-doodle-easily! It’s just like throwing a curveball. It might seem tough at first, but once you know how to do it, you know how to do it! Know what I mean, Vern? Here’s three easy steps. Step one, adjust your grip. That’s your grip on reality, by the way. Or yer berries. Whatever. Either or, keep it just firm enough. Step two, wind up. As in, get yourself ready to toss that motherfucker right across the plate. Motherfucker being your your personality and plate being her earholes, by the way. You gotta have some game to spit. Step three, release. You’re loose, you have something to say, and now you’re ready to you fucking don’t!”

So, thing is, even though that almost maybe sounded like there was possibly some advice in there (probably not), it was still ridiculous. Which is what thinking you’re going to get laid at CurvyBBW is. Ridiculous.

But why, Frankie? What’s wrong with CurvyBBW.com?

Sticking with baseball (were we talking about baseball?), the following knobtacular crapfests would equal strike one, two, and three of a spectacularly scam-a-rific strikeout.

Guess what? Not cute. Not anybody’s fantasy.

But there’s a fucking lot of them, so there’s that.

And details you shall have.

Alrighty, here’s your first detail! Which, uh, isn’t a detail at all, actually. It’s a tip. But really, it’s mucho important, so I need to tell you this first.

Before you sign up to a dating site—any dating site—make sure you read the terms and conditions.

That one little tip will save you from hours of potential headaches, stress, and possibly even financial loss.

See, by reading the terms and conditions of a dating site you have a chance to see if that site is doing any shady shit. If they’re pulling any cons. Because if they are, that shit will be detailed in the terms.

Isn’t that nice of them?

No. It’s not nice. It’s necessity. They most definitely are not doing it to be nice.

I mean, if they were trying to be nice, they wouldn’t be trying to shaft you in the first place.

No, they put their bullshit in the terms to cover their asses.

They absolutely know most of the lunkheads who come to their site and sign up are never going to spend even a fraction of a second looking at the terms. But that doesn’t mean those lunkheads aren’t bound to said terms. By them using the site and agreeing to the terms (even if they didn’t read them), the site can say they told Señor Lunkhead what was up, and are therefore off the hook. Yes, even though they’re full on engaging in deceptive bullshit. Sucks to be Mr. Lunkhead.

So, with all that said, how about we have a look at exactly what kind of crapola you’re up against? Let’s see what’s shakin’ at CurvyBBW, shall we?

Didn’t know you just wanted to be entertained, did you?

Exactly. You don’t. You’re there to meet someone. Not be fucking entertained. Yeesh.

Moving on… Witness the bullshit that is the “Fantasy Cuties”!

Guess what the important word in that bunch of blah is? You got it! Fictitious. As in, fake.

Just to be clear…

Feel free to go read the rest of their terms at their site, but I’ve seen enough. I’ve said it before and I’ll say it again: If you have some fake profiles, you may as well have all fake profiles. Because, mark these words, somebody is gonna get the shaftola.

Time to nope the fuck outta there.

Those words up there? They’re facts. The whole fictitious thing? That’s fact. Not something to choose to believe or not.

Listen, there is absolutely zero reason that you should be scammed out of your time and money. You don’t deserve that. No one does.

So, go on and re-read that stuff up the page a bit. Read it until the lightbulb comes on and it all sinks in. Trust me, you’ll be glad you did.