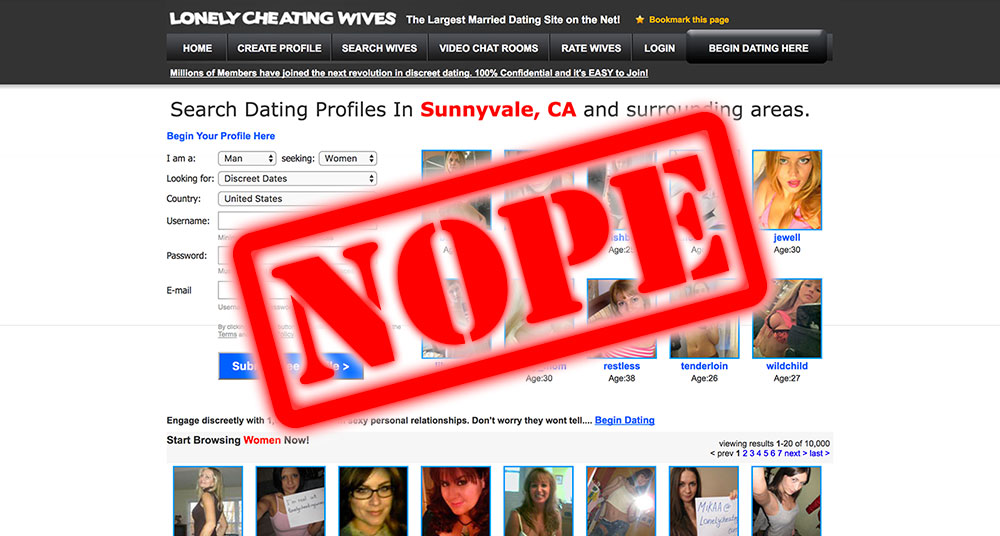 Solitary Sal who wants to be boink buddies with a lonesome lass: “Hey Frankie. How do I get laid at LonelyCheatingWives.com?”

Me: “LonelyCheatingWives.com? It’s a snap! And what makes it a snap? Well, the fact you’re gonna cheat your way through it, that’s what! I mean, cheating is about doing things the easy way, right? So, you know, how could this not be easy? Okay, here’s what you gotta do. First up is the contingency plan. Go on and get some regular old playing cards. Now find the ace of spades and slide that up your sleeve. Perfect. Step one is done. Now for step two, you’re going to need a pen so you can write the answer on your hand. What answer? You’re about to find out! Now pay close attention here because this is the most important part of all this. Ready? Take your pen, and very carefully, just big enough so you can read it, print out the following on the palm of your hand: You fucking don’t!”

What I’m saying is, you can be the cheatiest cheater in all of Cheatland and it still wouldn’t get you laid at LonelyCheatingWives.com.

But why, Frankie? What’s wrong with LonelyCheatingWives.com?

Not wanting to leave any one of the usual trio of bullshit out—you know, for fear of one of those things getting lonely—LonelyCheatingWives follows the traditional recipe for the ol’ scammy dating site fuck you: The never popular, yet ever present, fake members, fake profiles, and fake emails.

How considerate of them. Said no one, actually, ever.

Behold the “EliteFlirts”! Sounds so… elite! (Not really.)

Man, it’s been a while since we’ve come across a term we haven’t seen before.

Funny thing is, even though it’s a new term, it’s really the same bullshit!

As is always the case, when we’re looking for the truth about a dating site, we’re going to head on over to their terms and conditions page. The one place we have any chance of finding out if the site is trying to pull a fast one.

But first, a quick side note as to why, exactly, we’re going to check the terms…

Lucky for us—and much to the chagrin of all these scamarific fucking “dating” sites—in order for a site to not run afoul of the law, they are obliged to disclose in their terms what exactly is going on on their site.

Not so lucky for us, as long as they do that, they’re basically off the hook.

Normally, this kind of thing isn’t an issue, since I’d say the good majority of websites online aren’t trying to fuck you over. But when you bump up against a shady site, well they know 99.9% of people coming to their site aren’t going to read the terms. They count on it. So, they basically confess to their nonsense, knowing it’s not really going to make any difference, and then continue to do whatever the hell they want.

Now, armed with this knowledge about the terms and conditions page, let’s substantiate what we’re talking about.

And here we go. Section 10 brings the goods…

10.1.b. You understand and accept that our site, while built in the form of a personals service, is an entertainment service. All profiles are provided for the amusement and entertainment of our members and our users.

Remember this: Legit dating sites don’t try and peddle themselves as entertainment. You’re there to find a date, not be entertained.

10.1.c. EliteFlirts Communications: You understand, acknowledge, and agree that some of the user profiles posted on this site may be fictitious, and are associated with our “EliteFlirts” service.

There it is. Good ol’ “fictitious” profiles. The most common, and insidious, of the scammy shit that shady dating sites pull.

An additional quick word on the fictitious profiles…

LonelyCheatingWives, and many other duplicitous dating sites, like to mention in their terms that they mark their bullshit profiles with a little logo. An “EliteFlirts” logo in this case. This is supposed to allow the user to distinguish between a “real” and a “fictitious” profile. Presumably, the real reason is to keep themselves from getting reprimanded from the law, but I digress.

Regardless, my point is, logo, no logo, who fucking cares? As was already mentioned, most people never, ever, ever read the terms and conditions of a site, which means even if they did notice the little logo next to a profile, they wouldn’t have a fucking clue as to what it actually means! The term is purposely ambiguous, so that shit gets passed right over.

I also have to say—and I’ve said this before—if you have some fake profiles, you may as well have all fake profiles. The fact that there are any at all immediately states, in no uncertain terms, that the site you’re on does not have your best interests at heart.

Okay, time for a few more bits of horseshit from the terms.

10.1.c. • Initial messages from our EliteFlirts service may be automatically generated with no human involvement, and, messages and/or correspondence thereafter may be generated by third-parties hired or contracted by Us.

And some more for the shit stew…

Okay, fuck. That’s enough. You get the picture. If you want to see more (there’s always more), feel free to head on over to their terms and read the rest.

I, however, have seen all I can stand.

You know who else believes crazy things? People in cults, that’s who.

Guess who you should be in the following dramatization?

Hint: not the people that are dancing.

Those are people who have heard facts, yet for some reason, decide to ignore said facts and live in a fantasy land filled full of other people who endlessly get scammed by scammy scammers.

Don’t be those people.

Go re-read the bit in this review about LonelyCheatingWives using fictitious profiles on their site. That right there is a fact. A fact, no less, that once it sinks in, will keep you from being one of the many, many dancers that get scammed every day.