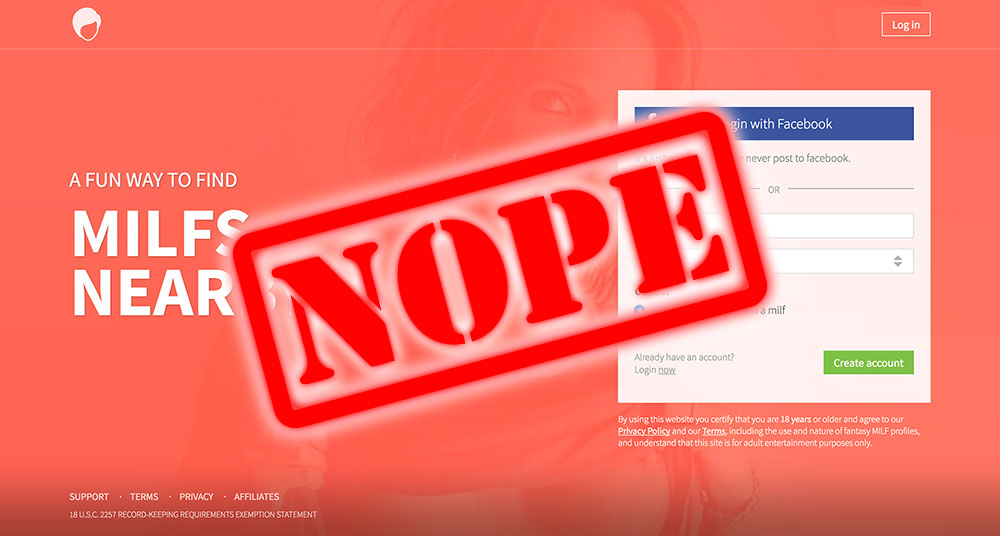 Handy Andy who wants to visit boxes on the hillside with a Botwin-esque babe: “Hey Frankie. How do I get laid at Milfder.com?”

Me: “Milfder.com? Real easy. Remember these four things and you got it made in the shade. Oh, and just to make it even easier, MILF is the acronym for the four things. Here we go. M is for Make your bed. That’s right. You don’t wanna be bringing home a hot mom, leading her to where you told her the magic is gonna happen, get there, and then your bed is all fucked up. You think that’s a turn-on? For a mom? C’mon! Next… I is for I’m not kidding. Make your fucking bed. Got it? Good. Okay, L is for Like, right fucking now. Seriously. It looks like two elephants and a rhino had a freaky jungle three way in there. Geez. And finally, F is for Fucking. As in, you fucking don’t!”

What I’m saying is, it don’t matter if you can bounce a quarter off them sheets, NGLAM. Oh, that stands for Nobody’s Getting Laid At Milfder, by the way. FFS.

But why, Frankie? What’s wrong with Milfder.com?

And why is it bad?

Fake stuff is no bueno. As in, not fucking good.

What kind of fake stuff?

“Fantasy MILFS” sounds like they should be something awesome, right?

So, listen… Before we get into the nitty-gritty of what’s going on at Milfder, I want to let you in on the biggest thing you should take away from reading this review. Here it is:

Always make sure to read the terms and conditions before you even think about signing up to a dating site.

I know, I know. Boring, right? I mean, who the hell actually reads those things?

But that, my friend, is the point.

Scammy dating sites count on the fact that most people won’t give the terms and conditions a second thought. They count on people not bothering to read them. They know that people are basically conditioned to zoom on by the terms and just click the “I agree” checkbox or its equivalent. That’s why they don’t worry that, in order to cover their asses, they have to disclose any shady shit that they’re pulling on the site.

Let’s have a look at Milfder’s own terms and you can see exactly what we’ve been talking about.

4. FOR ADULT ENTERTAINMENT PURPOSES ONLY

4.B. You comprehend, acknowledge, and accept that our Service, presented in the style of an online dating service, is an entertainment service. All content is provided for the entertainment and amusement of You.

Again I say, say what?

Being entertained is all well and good, but not when you’re signing up to a freaking dating site!

Not a strong start, Milfder.

4.C. THIS SITE UTILIZES FANTASY PROFILES IDENTIFIED AS FANTASY MILFS. You comprehend, acknowledge, and accept that some of the profiles listed on the Site may be operated by our Site or third party contractors and are fictitious.

Oh look. There are the “Fantasy MILFS” we were talking about before. Fictitious as a motherfucker. Like I said, definitely not awesome.

Had enough? I have. I mean, as soon as I see the word “fictitious” I’m headed in the other direction, but it is always interesting to see just how shifty these sites can get.

Anyway, If you want to read more of their terms (there’s always more nonsense to be found), feel free to check them out on their site, but I think we all get the picture now.

Come on now. Really? You don’t believe me?

You’re fucking with me, yes?

You have to be.

But on the off chance that you’re not, I’ll say this…

All that stuff about the fictitious profiles? Facts, my friend. From the big scammy horse’s mouth, no less.

Save yourself the massive headache that comes from getting duped by shyster dating sites like Milfder. Take a minute to head on back up this page and re-read all the goodness we laid down up there. The light bulb will turn on, and you’ll be glad you took the time to let everything sink in.

Seriously, trust me on this one.

I’m pretty sure you’re fucking with me though.