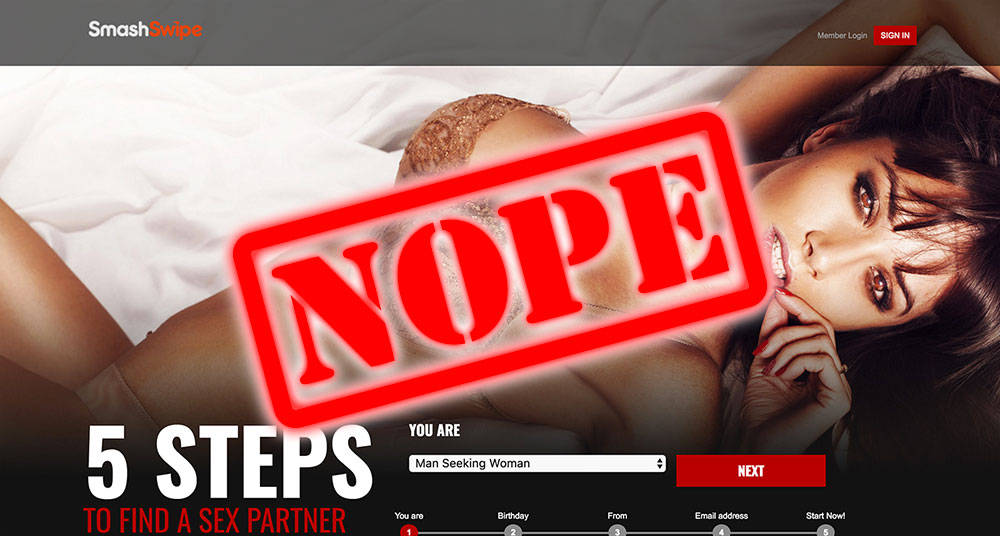 Sprucey Bruce who can’t wait to smash tortillas with a delicioso diva: “Hey Frankie. How do I get laid at SmashSwipe.com?”

Me: “SmashSwipe.com? Easily done, my man. You just have to follow these two mind-numbingly simple rules. Ready? Okay, rule numero uno: Do not, I repeat, do not attempt to swipe anything. Swiping shit will get you fucked, but not in the way you want. I mean, really, why would you randomly start stealing shit anyway? Yeesh. Now, on to rule number two: Aside from smashing tingly bits at some point in the future, there will be no smashing of any kind. Much like the stealing thing, why in the fuck would you just start smashing shit up? Who does that? Crazy people, that’s who. So dumb, fo’ real. Anyway, I told you this shit was simple, right? Now, assuming you followed the two rules—and really, how could you not?—then you are officially ready to you fucking don’t!”

What I’m saying is, rules or not, not even a hulking green superhero could get laid at SmashSwipe.

But why, Frankie? What’s wrong with SmashSwipe.com?

So, imagine you got yourself some fake members, fake profiles, and fake emails and you smash ‘em all together into one big shit pile. That wouldn’t be so good, right?

Well, you don’t have to imagine anymore because that’s exactly what you’ll find at SmashSwipe.com!

(And that ain’t a good thing.)

So, before we get into the details of the scammy gong show that is SmashSwipe, I am, as always, compelled to let you guys in on the single most important thing to remember when you’re looking at a dating site that you want to sign up to…

And I mean first. As in, before you sign up.

And, yeah, I may have given the following advice once or twice or a thousand times before, but the reason I keep repeating myself for you fellas is because this shit is crucial to you not getting hooped.

Much to the chagrin of all the less-than-reputable dating sites out there, the terms and conditions are where you can find the truth about what kind of scamfuckery is going on.

These craptastic donkeys have to spell out what happens on their sites in order to keep their asses from getting into legal hot water. So, buried deep in the legalese of the terms, where they know that basically no one is going to actually see the incriminating evidence, is where shit is laid out plain. They also know that whether someone reads what they put there or not, that user is still bound to those terms if they continue to use the site. Translation? Scammy site is off the hook, and yet another poor schmuck gets fucked.

It’s all utter horseshit, but unfortunately, that’s how it is. Lucky for us, we’re wise to their tricks.

Now, speaking of tricks, let’s dive into SmashSwipe’s terms and have a look at their ongoing trickery…

Heading on down to Section 9 we see:

9. FOR AMUSEMENT PURPOSES ONLY

And continuing that theme…

9.b. You understand and accept that our site, while built in the form of a personals service, is an entertainment service. All profiles are provided for the amusement and entertainment of our members and our users.

I’m gonna go out on a limb here and guess you weren’t thinking of signing up to an “entertainment service”.

Alrighty. Time to witness the amazing nonsense that is “Online Cupids”…

9.c. THIS SITE USES FANTASY PROFILES CALLED ONLINE CUPIDS®: You understand, acknowledge, and agree that some of the user profiles posted on this site may be fictitious and operated by the Site or its contractors.

9.c.i. Messages sent from our Online Cupids® service may be automatically generated with no human involvement, and Online Cupids® messages and/or correspondence may be generated by third-parties hired or contracted by Us.

9.c.ii. You understand, acknowledge, and agree that the information, text, and pictures contained in the Online Cupids® service profiles do not pertain to any actual person, but are included for entertainment and educational purposes only. Life events, experiences, interests, and geographic locations are fictitious. Nothing contained in any Online Cupids® service profile or message is intended to describe or resemble any real person – living or dead.

Fucking wow. “Online Cupids”. That is some severe bullshit right there.

That’s enough for now. It’s all I can stand at the moment. If you feel like you need to, head on over to SmashSwipe and check out the rest of their terms for yourself. Of course there’s more crazy on there. Always is. But what we have here is more than enough for me to say fucking no way, Jose.

Nah, I’m just fuckin’ with you. I can’t leave with you stuck in I-don’t-believe-you-land.

Listen, all that stuff we just talked about a little ways up this page? That shit is facts. As in, indisputable truths.

Like the part about the fictitious profiles. That’s truth. As said by SmashSwipe themselves, no less.

Go on and re-read all the nice words I laid out for you. Read ‘em until the waves of realization come crashing in and carry you far, far away from I-don’t-believe-you-land and deposit you firmly on to Fuck-that-noise Island.

Trust me when I tell you it’s a much nicer place to be.