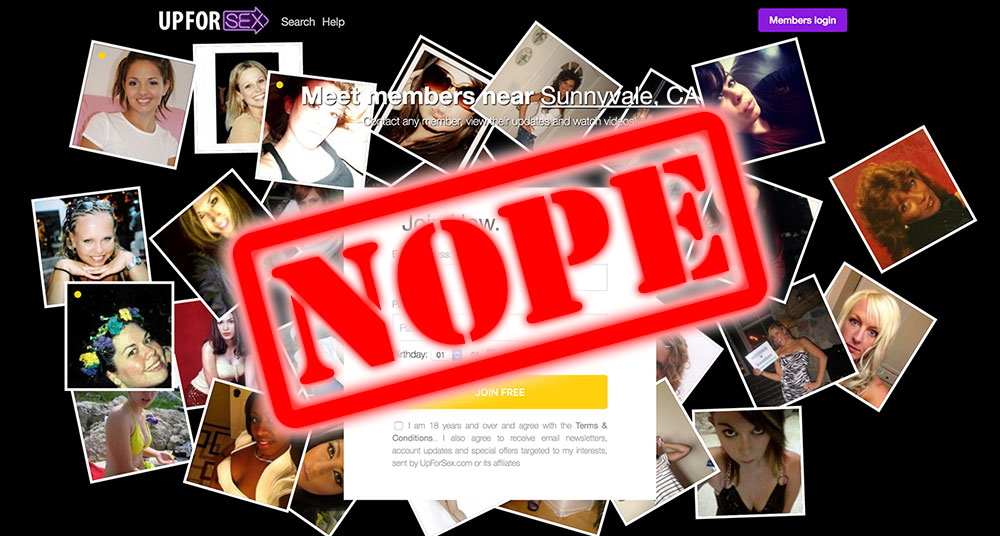 Cool Keith who wants to get up on it and sweat with a fly female: “Hey Frankie. How do I get laid at UpForSex.com?”

Me: “UpForSex.com? Practically effortless. Really, all you have to do is answer two simple questions. Get ‘em both right, and baboom! First train to Bonetown. Sound good? Good. Alrighty, question number one: Are you up for sex? Now, I’m gonna go out on a limb here and assume your answer is some variation of yes. Which, of course, is correct. Good job. I told you this was gonna be simple. Next question. Are you also down for sex? Let’s not kid ourselves here. There’s no way your answer to question number two can, or should, be anything other than yes. So, good job again. Now, with those two questions answered 100% correctly, you’re ready to board that train we were talking about a minute ago. There’s been a slight change to the destination though. You won’t be heading to Bonetown. You’re actually going straight to you fucking don’t!”

Here’s the thing… Up, down, all around, whatever. It doesn’t matter. There’s no direction that will lead to you getting laid at UpForSex.

But why, Frankie? What’s wrong with UpForSex.com?

Just as you normally would when your phone rings, you reach down to pick it up.

Well, let me tell you, a banana for a phone is not very helpful for answering calls. Or making them, for that matter.

Now, you know what else isn’t helpful?

In particular, for someone who is trying to get laid?

All of which you’ll find at UpForSex.com.

Can you feel that?

Can you feel the millions of minute vibrations dancing through the air like fireflies on the warm breeze of a gentle summer evening?

Can you see the shimmer in the sky? The rays of light bouncing pell-mell like sunbeams off the tips of every wave in the ocean?

What, pray tell, could it be?

What could cause such glorious sensations?

That, my friends, is the sweet, sweet tingle that precedes the man, the myth, the legend that is…

To what do we owe the great pleasure of a visit from El Sparko himself?

El Sparko says that the sparkle will be sprinkled on UpForSex with the caca profiles called “Online Flirt”.

Thank you for your sparkling wisdom, El Sparko. Thank you.

And so you shall have them.

First things first, though. Before we get into the nitty gritty of what exactly is going down at UpForSex, I need to share with you the single most important thing that you should take away from reading this review:

Always, and I mean always, read the terms and conditions of a dating site before you even think about signing up to it.

That little tidbit right there will save you from so much bullshit, it’s not even funny.

See, a dating site’s terms and conditions contain the usual legal stuff that websites generally put in there, but—and this is the key— they also contain any shady stuff that they may be doing. (They have to disclose their bullshit in order to cover their asses.) In other words, the terms and conditions is where you can find out the truth about a site.

So, what kind of things can you find out?

Well, why don’t we dig into UpForSex’s very own terms and see what kind of bullshit is buried in there?

Looky, looky. What do we have here? Section I.6. says:

I.6. THIS SITE USES FANTASY PROFILES CALLED “ONLINE FLIRT®” In order to enhance your amusement experience, to stimulate you and others to use our Services more extensively, and to generally sprinkle some sparkle and excitement into the Services of UPFORSEX.COM, we may post fictitious profiles, generate or respond to communications by means of automated programs or scripts that simulate or attempt to simulate your intercommunication with another real human being (though none really exists and any dialog is generated by programming), and we may employ or contract for the paid services of real persons who may interact with you as part of their compensated employment.

Okay, so there’s a lot going on in there, but the thing I have to point out first is the absolutely ridiculous “sprinkle some sparkle” bit. Seriously? So dumb. On the plus side, that is the genesis for our main man, El Sparko. I suppose that’s something good to come from such a steaming pile of horse turd. But yeah, otherwise, ugh.

On to the more pressing bits in that little snippet… In a nutshell? Fictitious profiles. As in, they use them. They literally say, among other things, that they pay people to talk to you.

What in the actual fuck?

Anyhoo. Since we’re here, how about one more helping of garbage?

Disingenuous. That sums things up nicely.

Welp, there you go. That’s some damning shit right there. Straight from their own terms and conditions, no less. Which, as I usually say, you should feel free to go and read the rest of, if you’re so inclined. There’s always more gobbledygook in there. But as far as I’m concerned, I’ve seen what I need to see. Specifically, any mention of fictitious profiles. Always a non-starter for me.

Hell to the no.

I gotta say, if the fact that the site itself telling you that they have fictitious profiles all over that motherfucker isn’t enough to send you running… well, shit. I dunno what will.

I can’t leave you like that. I can’t just leave you for the vultures that are circling overhead. Nay, I say! Nay!

Here’s what I’m gonna do…

First, I shall clear your mind. So you’re more receptive to the truth, however difficult it may be to believe.

Okay, now that your mind is clear, we shall pull out the proverbial big gun. The big sparkle gun, that is.

Let ’em have it, brother!

Now go on and re-read the bits up there about the fictitious profiles. There’s no way you miss the facts in all their sparkling infamy now.