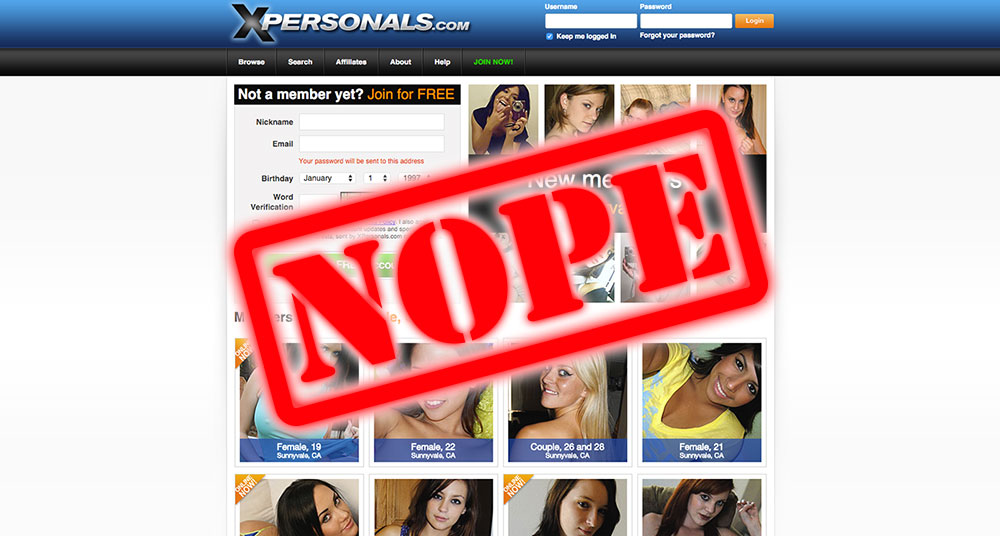 Dude who wants to get up close and personal with a fine lady: “Hey Frankie. How do I get laid at XPersonals.com?”

Me: “XPersonals.com? As a matter of fact, it’s pretty easy! Just, you know, do some stuff. Anything, really. Totally doesn’t matter. Then, once you’re done doing stuff, you fucking don’t!”

The moral of the story is: It don’t matter what you done did, you ain’t getting laid at XPersonals.com.

But why, Frankie? What’s wrong with XPersonals.com?

For no reason whatsoever, today I shall pass on this utterly unsurprising info via a cheer!

What don’t we appreciate?

Fine, my cheer sucks. But not worse than XPersonals and their fake members, fake profiles, and fake emails! Boom!

Love to. We’ve actually seen this before, but it still rates high on the ridiculous meter.

Here is where I once again point out that those are their words—slightly paraphrased—not mine.

Here is also where I tell you to keep reading to find out what in the fuck that’s supposed to even mean.

THIS SITE USES FANTASY PROFILES CALLED “ONLINE FLIRT®”. In order to enhance your amusement experience, to stimulate you and others to use our Services more extensively, and to generally sprinkle some sparkle and excitement into the Services of XPERSONALS.COM, we may post fictitious profiles, generate or respond to communications by means of automated programs or scripts that simulate or attempt to simulate your intercommunication with another real human being (though none really exists and any dialog is generated by programming)

There’s more, of course, but really, isn’t that enough?

I’m just gonna go ahead and assume you forgot to read the section above. You know, the one that, in no uncertain terms, explains how they create fictitious profiles.

Oh. You did read that?

And you still don’t believe me?

Alrighty then. I, uhh… Seriously. You read that? Because it kinda seems like you didn’t actually read that. Maybe now is a good time to read it. No no. Go ahead. I’ll wait.

Back? Good good. And?

Actually… Wait a sec. Don’t answer. I’m just going to assume you believe me now so my head doesn’t explode if you tell me you still don’t.