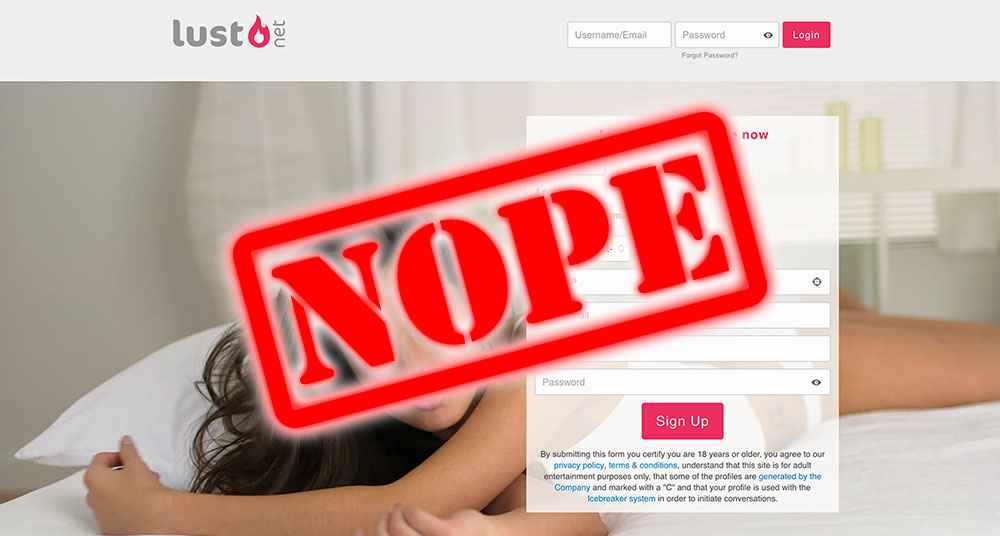 Yearny Bernie who wants to feedo his libido with a lustful lady: “Hey Frankie. How do I get laid at Lust.net?”

Me: “Lust.net? Easy like mac and cheesy. All you gotta do is make yourself desirable. What’s that? How, exactly, are you supposed to do that? Just make yourself smell good, my man. That’s the trick. For serious. Nobody’s down with a stinky dude, ya dig? Here, just follow these simple as fuck instructions and you’ll be good to go. First, think of some things that a lady might like to tickle her olfactory senses. Some chocolate? Sure. Leather? You bet. Maybe a fine red wine? Oh yeah. That’ll do it, all right. Now that you have your scents picked, head on out and procure each of those things. Got ‘em? Good. Okay, next, take all the things you’ve chosen and mix ‘em up in a bowl. Get them nice and incorporated. Perfect. Now for the grand finale. Stick your finger in the mixture of straight up love scent and dab a little behind each ear. That’s the stuff. Now take a deep breath, and prepare yourself for the onslaught of you fucking don’t!”

Here’s the thing, there’s no magic potion—no matter how good it smells—that will get you laid at Lust.net. And that stinks.

But why, Frankie? What’s wrong with Lust.net?

You know what consists of three things and is pretty damn badass?

See? Classic. Timeless. And you can juggle in it. Apparently.

As contrast, here are three things that are both bad and, um, ass.

Hint: not the suit.

Oh, right. Yeah, me neither. What I meant to say was…

Can you feel the depressing bullshit in the air?

And you’re gonna get ‘em!

Before you sign up to a dating site—any dating site—always make sure to read the terms and conditions of said site first.

Now, you may be thinking to yourself, “Why on earth would a dating site tell me how they’re going to try and scam me?”

And here’s the answer: It ain’t by choice.

I mean, obviously these motherfuckers would rather keep their bullshit to themselves. But they lay out their nonsense in the terms to stay on the right side of the law. See, as long as they disclose their shadyness in the terms, they get to keep on doing what they want.

To add to that, keep in mind that these scammy dating sites aren’t stupid. They know that nearly everybody that signs up to their site tra-la-las right past the terms without giving them a second thought. Or any thought at all, for that matter. And they also know that whether a customer has read the terms or not, the simple act of continuing to use the site constitutes their agreement to whatever terms have been laid out.

Basically, here’s how it goes: They disclose their tricks in the terms. You agree to the terms by signing up to the site. They’re off the hook for their flimflam. You’re fucked. And not in the way you wanted.

It’s a shitty system. For the user, anyway. The shady dating sites aren’t going to complain. They continue to make money hand over fist off the backs of unsuspecting users of their site, day after day.

Okay, with all that said, let’s have a look at what we’re actually talking about here.

Right up in Section 1 we find this little tidbit:

www.lust.nets primary purpose is to provide an adult entertainment experience.

I’m pointing out that part because it is important to remember that legit dating sites are not trying to be an “entertainment experience” for you. Legit dating sites try and help you find a date.

Fuck, that drives me batty.

Company Generated Cupid Profiles (marked with “Note: a little C icon is here”) are created, managed and maintained automatically for marketing, the improvement of the Service, to orient and assist Users about the features and functionalities of the Service, and in order for our Registered Users to experience the type of communications that they can expect as paying Members. The Company Generated Cupid Profiles may encourage conversation between members by making introductions or recommendations or just by chatting with Users, for entertainment purposes. From time to time, and in our sole and absolute discretion, Company Generated Cupid Profiles may be introduced with a designated symbol, which is the sign “Note: a little C icon is here” on every item of interaction of such a profile.

Translation? They create fake profiles to interact with users, and—here’s the best part— if they feel like it, they may even tell you, via a completely ambiguous icon, which ones they are.

You acknowledge and agree that some of the profiles posted on the Website that you may communicate with as a Registered User may be fictitious.

Listen, I’ve said it before, and I’ll say it again…

Man, if you want to read the rest of the nonsense in their terms, head on over to their site and give it a go. But that’s it for me. Point has been made, and I’ve had enough of this garbage for now.

Not sure if serious.

However, on the off chance that you are, please indulge me and go re-read the section above this one. Pay particular attention to the part where Lust.net’s very own terms and conditions state that they have fictitious profiles littered all over their site.

I mean, maybe you missed that part. Who knows?

Know this though, all that stuff we talked about up there? All that stuff is fact. And facts aren’t things that you choose to believe or not. They’re facts. Indisputable truths.

Most importantly, recognizing those facts is going to do something for you that you’re going to be very happy about. It’s going to allow you to not get scammed by a deceitful motherfucker of a “dating” site. That, my friend, is a big win.

Now, if you aren’t serious, and you’re just fooling with me, well then, well played, sir. Well played on all counts. Enjoy your scam-free existence! I bid you good day.