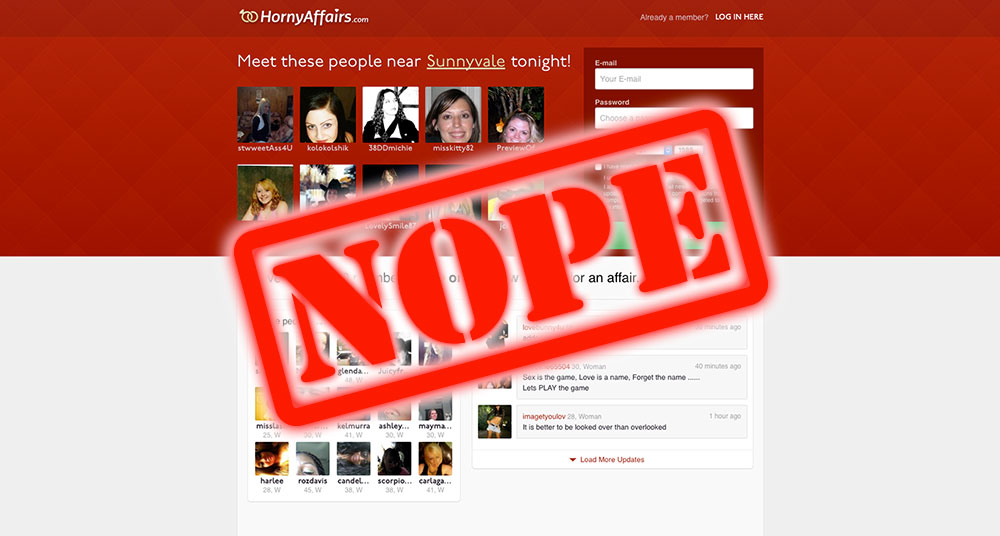 Guy who wants a little side action with a sexy señorita: “Hey Frankie. How do I get laid at HornyAffairs.com?”

To clarify, Wile E. Coyote has a better chance of catching the Road Runner than anybody has of getting laid at HornyAffairs.com.

But why, Frankie? What’s wrong with HornyAffairs.com?

Somehow it is just beyond sites like this to build a legit service that doesn’t take advantage of people. But I digress…

Oh boy. Looks like it’s deja vu all over again.

No worries. I figured you would.

While I can assure you that I have already seen the term “sprinkle some sparkle” enough times to last me a lifetime, I can understand that most people probably haven’t.

Why haven’t they? Because most people don’t bother to read the ever-enlightening Terms and Conditions page on a website.

That said, allow me to save you the trouble…

In section I6 of the T&C on HornyAffairs.com we find the following bit of scamtacular nonsense:

In order to enhance your amusement experience, to stimulate you and others to use our Services more extensively, and to generally sprinkle some sparkle and excitement into the Services of HORNYAFFAIRS.COM, we may post fictitious profiles, generate or respond to communications by means of automated programs or scripts that simulate or attempt to simulate your intercommunication with another real human being (though none really exists and any dialog is generated by programming), and we may employ or contract for the paid services of real persons who may interact with you as part of their compensated employment.

Can you feel your excitement building at the prospect of fictitious profiles being sprinkled everywhere? Didn’t think so.

Look, I’ve said it before, I’ll say it again…

But as always, I’ll follow that up by saying, if you wanna go ahead and get scammed, ain’t nobody here gonna stop you.