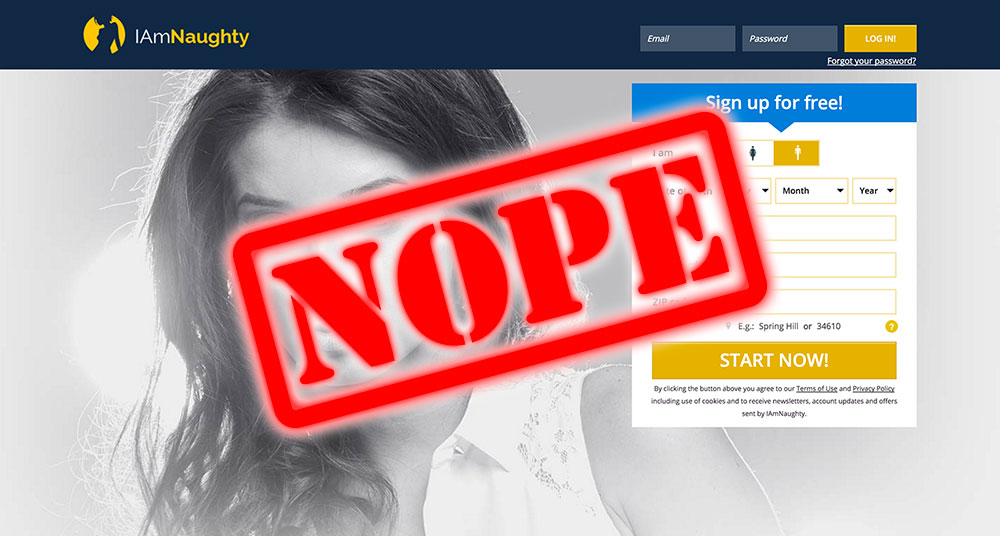 In this review you’re going to see just how big a scam IAmNaughty actually is.

(Including examples of their shady tactics that come right from their very own website.)

Carnal Carl who wants some cookie nookie with a cheeky chiquita: “Hey Frankie. How do I get laid at IAmNaughty.com?”

Me: “Hooboy! So simple. It’s all there in the name. You wanna do it? You gotta be it. So, get ready to be your best unruly self! Usually doing three impish things is enough to get classified as a mischievous little monkey, so let’s begin. First, go stick your paw in a cookie jar. No, that’s not a euphemism. A hand in the cookie jar is the pure essence of disorderly conduct. Good start. Next, go to the grocery store and put nine items in your basket. Then go through the eight items or less express checkout! So bad! Finally, head on over to your local Googolplex to catch the latest cinematic masterpiece. But—here’s where it gets super rascally—sneak in your own chocolate bar! Gah! You are officially the wickedest! Now prepare yourself to you fucking don’t!”

But why, Frankie? What’s wrong with IAmNaughty.com?

Only the same three goddamn things that are always wrong with all these shady dating sites:

These guys spend so much time working on trying to confuse you that they don’t even have a name for their fake members. Rest assured that they’re there though. Fake members, that is.

As I am wont to do in these reviews, I’m going to preface this next bit by reiterating the same thing that I’m always telling all you sexy motherfuckers:

Any time you’re thinking of signing up to a dating site, be sure to read the terms and conditions first.

By doing that one simple thing, you give yourself a chance to find out what’s actually happening on a dating site. Essentially, you can see if you’re going to get conned before actually getting conned. The few minutes it takes you to read the terms can end up saving you from a massive, entirely preventable, headache.

Now, usually the whole deal with the terms and conditions on these scamarific sites is that the stuff that’s actually pertinent to you—i.e. the bits about fake profiles—is buried in amongst the legal mumbo-jumbo. This is not by accident. These sites know that most people don’t bother to read the terms and conditions (which is why I always explicitly tell people to do exactly that) because they’re boring and confusing. If people don’t read the terms, they never see the truth, and scammy dating site number gajillion-and-two lives on to bilk unsuspecting dudes for yet another day.

Anyway, speaking of confusing, these motherfuckers take the doublespeak to new levels in their terms. Check this out:

Starting in the eighth paragraph of section 1:

This Website does not create user profiles, so called “virtual profiles” or use artificial intelligence in order to simulate people.

“Wait a second there, Frankie,” I hear you saying. “They just said they don’t create user profiles.”

Yeah, this is a prime example of the kind of confusing nonsense I’m talking about. The key here is the words “to simulate people”. Basically, they’re saying they create fake profiles, but for entirely different reasons. They would never do it to actually simulate people! Say it ain’t so! Who would do such a thing! Yeesh.

This is a smokescreen, kids. How do we know this? Look at the very next paragraph:

We create user profiles for use by our customer support representatives for the support, marketing, improvement of the Service, and in order for our Registered Users to experience the type of communications that they can expect as paying Members. Our customer support representatives are encouraged to speak with our members and also to stimulate conversation between members by making introductions or recommendations or just to chat with Users, for entertainment purposes. Additionally, the Website utilizes automated system profiles to communicate with Users to enhance our Users’ entertainment experience.

That right there looks to me like a good old fashioned ball-breakin’ bamboozler!

I think you can see what’s going on from that paragraph alone, but just in case you want a little extra contradiction comedy…

You acknowledge and agree that some of the profiles posted on the Website that you may communicate with as a Registered User may be fictitious. The purpose of our creating these profiles is to provide our Registered Users with entertainment, to allow Registered Users to explore our Service and to promote greater participation in our Service. The messages they send are computer generated. Messages from the user profiles we create attempt to simulate communications so that should you become a paid Member you are encouraged to participate in more conversation and to increase interaction among fellow paid Members.

Okay. That’s about all I can stomach. If you want to read the whole thing, head on over to their terms and check it out for yourself. Have a nice head-shaking chuckle at the utter nonsense you’ll find.

Here’s the last thing I’ll say on this today…

While it’s entirely possible that they have some real members on their site, it’s also painfully obvious from their very own terms and conditions that they also have fake members. My stance on the fake member thing hasn’t changed. If a site has some fakes, they may as well all be fakes. Because, believe this, somebody is gonna get shafted. Fake members? Get the fuck out.

I get that this set of terms is a little confusing. We’ve established that. But seriously, confusing or not, it is what it is.

Just re-read that nonsense until it sinks in. Until you believe it. Trust me when I tell you that that will be a much, much, much better use of your time than any time you might spend getting scammed by yet another unscrupulous dating site.