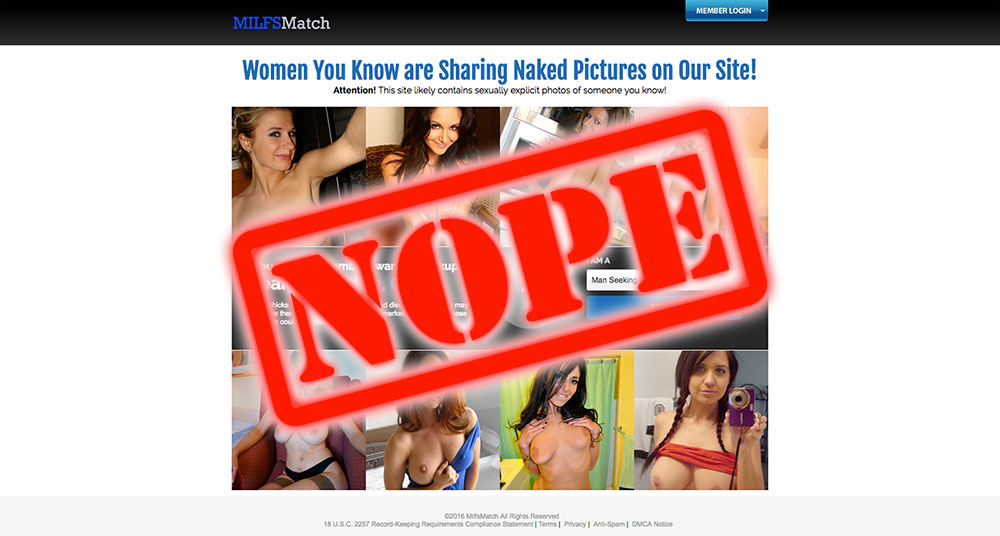 Me: “MilfsMatch.com? Super easy Mayor McCheesy. All you gotta do is play a little game. Ready? Good. It’s time to play the Match Game! The rules? Just fill in the blanks. If your answer matches the correct answer, you win! Do that three times and you get a chance at the Grand Prize! What’s the Grand Prize? Oh, you know… Just the super secret sauce answer to your original question. Now, enough with the chitchat. Let’s play! Question numero uno: His head was so big, it barely fit in her _____. That’s right! Hat! Well done. Question two: That’s the hottest piece of _____ I’ve ever eaten. Bingo! Pizza! You did it again! Alrighty, get this next one right for a chance at the Grand Prize! Question three: I love _____ so much. I could lick it all day! You’re clever! Ice cream is correct! You know what? You’ve done so well, I’ll just tell you the answer to the Grand Prize question. You might have already guessed it. Here it is: You fucking don’t!”

What I’m saying is… _____ gets laid at MilfsMatch.com. Let me just fill in that blank for you… Nobody.

But why, Frankie? What’s wrong with MilfsMatch.com?

Yeah, okay. I know that sounds awful. Just posing a hypothetical to illustrate something here.

If I wanted to make some bullshit soup, I’d need exactly three ingredients.

They are as follows:

And yeah, you’re right. Nobody would ever want such a thing.

Okay, so cupids are kinda ridiculous at the best of times. Not a fan.

Which, of course, you will find aplenty at MilfsMatch.

But first! I have to hit you with my usual pro tip:

Before you even think about filling in your precious details and signing up to a dating site, read the terms and conditions. Always. No exceptions.

See, the terms and conditions is the one place on a dating site that contains the truth about what’s actually going on. More often than not, that truth will be buried deep in a bunch of legal gobbledygook, but it’ll be there. And no, not for your benefit. It’ll be there solely to cover the dating site’s ass. So, they can say they told you about the crap they pull. Because by using the site, even if you didn’t read the terms, you agree to their shitty behavior.

Sucks for you, but that’s their intention. They know most people will never spend even half a second thinking about the terms and conditions of using a site. That’s why these sites don’t worry that they have to put their cons in there in the first place. It’s basically a win-win for them. They’re covered, and they rarely have anyone discover their garbage.

Well, it’s time for some win for you. Fuck getting sucked in. You don’t deserve the headache. And all you have to do to avoid it is read the terms and conditions.

Now, how about we prove the point?

If we zip on over to Section 9 of the MilfsMatch terms, we see:

9. FOR AMUSEMENT PURPOSES ONLY

“Entertainment service”. “Amusement purposes”. Riiight. Not what you’re there for, I’m guessing.

Wanna see what the “Online Cupids” I mentioned a bit ago are all about? Behold…

9.c. THIS SITE USES FANTASY PROFILES CALLED ONLINE CUPIDS®: You understand, acknowledge, and agree that some of the user profiles posted on this site may be fictitious and operated by the Site or its contractors.

9.c.i. Messages sent from our Online Cupids® service may be automatically generated with no human involvement, and Online Cupids® messages and/or correspondence may be generated by third-parties hired or contracted by Us.

And one more tidbit cuz why not?

9.c.ii. You understand, acknowledge, and agree that the information, text, and pictures contained in the Online Cupids® service profiles do not pertain to any actual person, but are included for entertainment and educational purposes only. Life events, experiences, interests, and geographic locations are fictitious. Nothing contained in any Online Cupids® service profile or message is intended to describe or resemble any real person – living or dead.

If that doesn’t spin you exactly 180 degrees and send you far in the opposite direction, I’m not sure what will. That said, if you’re so inclined, and feel like you haven’t shaken your head enough, feel free to go read the rest of the nonsense on their terms page. There’s always more head-shakable blah to find.

I’ve had my fill though. Fuck to the no.

You don’t believe me, hey?

Okay, I see your silliness and raise you… a robot dance party! On the beach!

Are we done being ridiculous now?

Go re-read the bits up there about the fictitious profiles. Let that sink in for a minute. Good? Okay then.

I mean, of course you can do what you want to do, but really, you can’t deny facts. That’s why they’re, uh, facts. And the fictitious profile stuff? Them’s facts.

Shitty stuff to think about, I know. That sites would deliberately try and rip you off AND be able to continually get away with it? It blows. But it is what it is.

At least you’re in the know now.

Here, have some Arnold doing shoulder flies with cats to cleanse your palate.