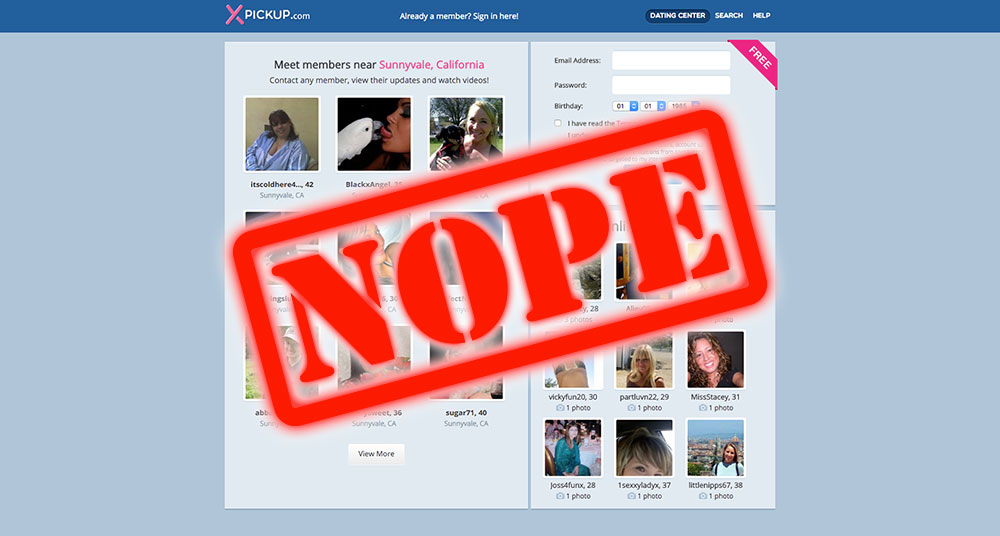 Eager dude who wants to pick up a willing woman: “Hey Frankie. How do I get laid at XPickup.com?”

Me: “XPickup.com? No problem. Just hop into the nearest pickup truck and head to the store. Then pick up a few things that you think you’re gonna need for some sexy time later on. When you get back home after you pick up your dry cleaning, be sure to pick up all the crap you left on the floor earlier. Finally, after you’ve picked up everything else that you possibly could, you’re ready to pick up a big pile of you fucking don’t!”

Pick up what I’m putting down here, amigo… The one place you won’t be picking anything up from is XPickup.com.

But why, Frankie? What’s wrong with XPickup.com?

If only there was some way that I could summarize what’s wrong with XPickup.

Oh yeah! There totally is!

Either way, I shall call him… El Sparko.

In true cover your ass fashion from yet another example of a scamtastic hookup site, buried deep in the Terms and Conditions is where we find the slightest glimmer of truth.

Let’s have a look at section I6, shall we?

In order to enhance your amusement experience, to stimulate you and others to use our Services more extensively, and to generally sprinkle some sparkle and excitement into the Services of XPICKUP.COM, we may post fictitious profiles, generate or respond to communications by means of automated programs or scripts that simulate or attempt to simulate your intercommunication with another real human being (though none really exists and any dialog is generated by programming), and we may employ or contract for the paid services of real persons who may interact with you as part of their compensated employment.

Just for fun, I’ll include another little bit of the bool-chit:

That right there is some pretty top quality nonsense. Fuck that.

If it sparkles and you know it, run away.

If it sparkles and you know it, run away.

If it sparkles and you know it, and you still don’t freaking believe it,

You should still turn around and run away.

Okay, I kinda butchered that little ditty, but the point is, believe the T&C. It’s the one place where the truth gets told.

Now, if you still don’t believe what I’m telling you, then just sparkle on, you crazy diamond. Sparkle on.